Coalitions, especially intersectional ones, can make for strange bedfellows. Many of us who advocate for early modern women writers might well avert our eyes if those women appeared on our street corners to hawk their religious pamphlets – just as they in turn might cast a censorious glance in our direction as we scurried past. “For various reasons, I sometimes feel uncomfortable about all this work on early modern religious texts,” tweeted Helen Smith on April 5 2018, citing her “lifelong atheism” as one reason for her discomfort. “The #nuntastic hashtag, great though it is, doesn’t let scholars articulate their unease at these texts, and especially at particular subject positions,” she continued. Many of us would identify as “activists” – as passionate advocates for marginalized or forgotten voices – but we must also be aware of the uneasy intersectionality of a project that involves the recruitment of different, potentially resistant identities for the imaginary coalitions we seek to form with women of the past. In this post, I want to take rather a long detour through a text by a virtually unknown early modern woman writer to shed light on this issue, so bear with me.

The Introduction to our collection, The Politics of Female Alliance in Early Modern England, begins with a brief discussion of Anna Walker’s A Sweet Savor for Woman, a little-known manuscript in the Egerton collection of the British Library. Discovered and dated to 1606-7 by Suzanne Trill, this exquisitely bound and illustrated quarto volume written in three different scripts (gothic, italic and secretary) offers us a glimpse of an accomplished and ambitious woman seeking the patronage of Queen Anna. [1] Bids for patronage were common; Aemilia Lanyer’s Salve deus rex judeorum(1611) opens with dedicatory poems to Queen Anna and other aristocratic ladies. What makes Walker’s approach unusual is her bold claim to intimacy with the Queen, couched in the (usually male-coded) language of friendship. “Walking solitary, being alone in a wilderness, finding by chance a frind being naturally borne and brought up together, nature will work to love, and love wil showe frute thereof,” Walker confidently asserts in her dedicatory epistle (6r). Repeatedly emphasizing their shared first name and Danish cultural origins, “in one countrie and iland . . . born together,” Walker represents their affinities visually in the manuscript in a hand-drawn and tinted emblem depicting her fully armed father with the Danish King in the foreground; in the background stand two well-dressed aristocratic ladies, one handing the other a basket of fruit ( 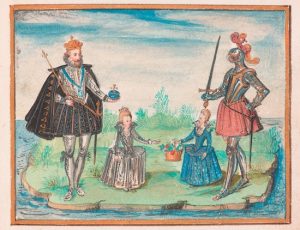 72r, 71r). In the accompanying dialogue between “Anna ladie” (the Queen) and “Anna babie” (Walker herself), the Queen is made to support Walker’s claim to friendship by asserting their connection: “Anna, both, wee borne, for I land” (71v). The gender the author shares with her dedicatee is underscored by the running title “from woman to woman” that adorns an extended portion of the manuscript (14r-27v). At first glance, Walker’s text appears to support Kimberlé Cranshaw’s claim that an intersectional analysis of identity-based alliances shows that they are “coalitions, or at least coalitions waiting to be formed.” [2]

This projected coalition between the two Annas is potentially intersectional, promising to unite the women across lines of both social and religious difference. “Alas I crie with woo, woo upon woo,” laments Walker at the end of the manuscript, now represented as a naked figure kneeling in a shower of rain, clasping her hands in a desperate plea to t 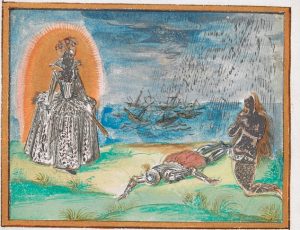 he sumptuously dressed Queen basking in the sun (75v). The social inequality between the two women is marked in Walker’s prostration “wetherbeaten & beare” (76r).

Yet a powerful opportunity for intersectionality lies in their religious difference. For Walker’s manuscript, with its extensive biblical citations and admiration for the Queen’s “godlie” Lutheran ancestors, is clearly coded as ultra-Protestant, whereas Queen Anna’s conversion to Catholicism was by this time an open secret. In forging an alliance with the Queen based on their shared gender and ethnicity, Walker suggests that – despite religious difference – they might work together against “sartaine men crept in, wich were before of ould ordained to this condemnation, ungodly men thay are, wich turns the grace of our god into wantonnes” (8v). [3] After all, as Anna Carastathis suggests, individual identities are “internally heterogeneous, complex unities constituted by their internal differences and dissonances,”[4] and Queen Anna’s private Catholicism already co-existed with her public Protestant alliances .[5]  As I argue in my essay for our volume, Lanyer recruits Queen Anna both as “Most gratious Mother of succeeding Kings” and as hub of a largely Protestant circle of female courtiers to launch a searing Protestant critique of King James. Similarly, in her essay “Tyrants, Love and Ladies’ Eyes,” Roberta Barker argues that the alliance between boys and women on the Jacobean stage gestured at Queen Anna and Prince Henry joining together “to right the wrongs of a kingdom.”[6] Such alliances were truly intersectional as “effective political alliances that cross existing identity categories . . . to pursue a liberatory politics of interconnection.”[7]

Far from celebrating differences or allowing them to speak, however, Walker shuts them down, launching into virulently anti-Catholic attacks on “our papists we have in ingland woe unto them” (14v) in a liberal display of what Diane Purkiss has recently called the “vicious and paranoid anti-popery” of the age.[8] In rhyming doggerel verse she invites the queen as her “playfellow” to exorcise the “great foule beast” with the words: “away say whore poope / you have to much scope” (26r). Walker’s open attack on the “pope . . . so filthy like a sow” (27v) may well have ensured the rejection of her new year’s gift, since the queen’s chancellor Roger Wilbraham probably regifted it to his daughter Elizabeth (whose inscription appears on the flyleaf).[9] If her manuscript otherwise circulated, Walker may have appealed to the “Gratious, noble and gentle good reader” who shared her radical Protestantism (12r), but the text closes off any intersectional appeal by openly denouncing the queen’s religious difference. 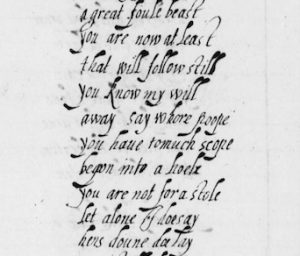 And this brings me back to my opening. Walker was a religious activist – or, in early modern terms, “a supposed Prophetess” – who may later have died for her prophecies by predicting the death of the Danish king and the end of the world.[10] For an early modern woman, her language is bold and her manuscript audacious; as a religious miscellany containing the first original sermon written by a woman, it deserves further study. But probably because I am uncomfortable with Walker’s nasty intolerance, the two published essays in which I discuss her work avoid dealing with it directly. I want to make her into my kind of feminist – a woman who insisted on bridging the distance between herself and the Queen, writing “from woman to woman.” Yet this reading not only ignores the fervent religio-political agenda that fueled Walker’s writing but also abandons intersectionality. For if we do as Walker does – that is, if we elide difference and recruit all women to our activist cause – we cannot claim to be intersectional. As Margaret Ezell observes in her still-foundational Writing Women’s Literary History, “The recreation of a female family of authorship . . .  suggests that it will provide the emotional security and support lacking in the world at large. The danger in searching out one’s relatives, however, is whom one might find.”[11] Like an overbearing great aunt, Anna Walker articulates views I find repugnant. But making her voice audible is an intersectional act.

Christina Luckyj is Professor of English at Dalhousie University.

[3] This is a citation from the epistle of Jude (Jude 4). Walker reproduces the entire Epistle in her manuscript, replacing Jude with herself, “Anna a servant of Jesus Christ and sister of James” (8v).

[10] Jürgen Beyer and Leigh T.I. Penman, “The Petitions of ‘A Supposed Prophetess’: The Lubeck Letters of Anna Walker and their Significance for the Synod of Dordt: A Linguistic and Contextual Analysis,” Revisiting the Synod of Dordt (1618-1619), ed. Aza Goudriaan and Fred van Lieburg(Leiden: Brill, 2011), p. 109-110.