May 2017 – Creative Women on the Move: Two Transnational Celebrities, An Actor and a Calligrapher

Sarah Ross for the SSEMW Blog

Early-modern women moved. Even if much prescriptive literature consigned women to domestic drudgery in fixed abodes, their lived experiences often evinced considerable mobility artistically, spiritually, intellectually, and physically — as readers of this blog series are now well aware. Joining the conversation, I would like to (re)introduce to readers two fascinating women who crossed multiple borders, in multiple senses: Isabella Andreini (c.1562-1604) and Esther Inglis (c.1571-1624). Andreini and Inglis had a great deal in common, even if at first glance they seem to have inhabited very different worlds. The Italian Andreini earned accolades as a poet, as the author of a wildly popular pastoral drama titled Mirtilla (The Blueberry, in its tenth edition by 1616), and as a commedia dell’arte performer. Inglis, French by birth and Scottish by marriage, devoted her life to work as a calligrapher and Christian humanist – pious pursuits embodied in the over 50 polyglot and multimedia copybooks she created that drew upon the maxims of French moralists but also from her own reading of Scripture and, to a lesser degree, classical moral philosophy (see Smith and Yeo).

When we look closer, however, we find striking commonalities between these two busy writers and artists. Both women belonged to the middle ranks of society. Both also had the good fortune to collaborate with husbands who evidently did not cleave too much to patriarchal norms. Yet marriage for both Andreini and Inglis did entail bearing multiple children. Andreini died while on tour in Lyon, France, from complications attendant to the birth or late-term miscarriage of her eighth child. Inglis mothered four children who survived to adulthood, as well as two others who died young. Andreini and Inglis may have wanted many children for their own reasons, but social conventions also dictated serial parturition as a wifely duty. Fortunately for posterity, their literary and artistic productivity proved equally prolific.

Andreini and Inglis suggest to us the possibilities for early modern women who were not noble or even especially wealthy to work and think transnationally, and to be recognized for doing so. Both traveled, though Andreini more extensively and regularly, owing to her theatrical career. Both earned celebrity within the European cultural elite. Soon after her death, a commemorative medal struck in Lyon honored Andreini’s contributions, joining scores of tributes pouring out of Italian presses at the same time: 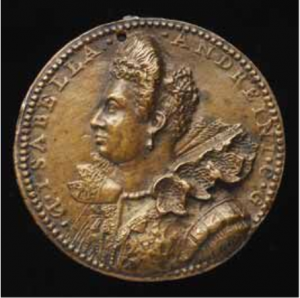 Long after Inglis’s death, her array of stunningly precise calligraphic hands and the breadth of her linguistic skills still inspired extensive commemoration in George Ballard’s encyclopedic Memoirs of Several Ladies of Great Britain (1752).

Families on the Move

Transnationalism was not always a positive experience, or even voluntary. During the religious wars of the sixteenth century, violence and persecution touched many if not most lives, and millions of early modern Europeans lived as religious refugees and exiles (see most recently Terpstra). The Inglis family belonged to this world, or so they emphasized.

Esther Inglis was born in Dieppe, but raised and married in Scotland. Her father, Nicholas Langlois, had been a schoolteacher in France. (His daughter, once married to a Scot, would ‘anglicize’ her natal surname of Langlois, which itself means “the English one,” as “Inglis.”) Fleeing the persecution of Huguenots, he settled with his family in Edinburgh around 1574, where he became master at the French School. Langlois taught spoken and written French, as well as scribal handwriting, services for which he received a substantial annual salary from King James VI. Langlois probably educated Inglis in the humanities, given his profession and her skills both in Latin and in literary French. Inglis’ mother, Marie Presot, a scribe in her own right, taught her calligraphy.

Doubly lucky, Inglis married a learned man who supported her career. In 1596, she wed Bartholomew Kello, clerk for foreign correspondence at James VI’s court. After James became King of England, Inglis and her husband followed him to London, taking up residence there and in Essex (where Kello obtained a post as rector) from roughly 1606 to 1615, before returning to Edinburgh, where they remained until her death in 1624. Inglis and Kello worked as a team. She acted as his scribe; he became her publicist and business manager, securing payment for her numerous copybook commissions.

Of Isabella Andreini’s natal family, we know nothing securely. She called herself Paduan, even for legal purposes. Perhaps she was. But, as is often the case with comici (commedia dell’arte performers), not a scrap of hard evidence remains that dates any earlier than her marriage. Isabella’s husband and fellow-performer, Francesco (d.1624) claimed roots in Pistoia. Yet, here as well, no documentation has arisen beyond his own testimony from a time well in his maturity. In any event, civic origins would have been almost a moot point for the Andreini family, given the dictates of their profession. The Compagnia dei Gelosi this couple co-directed kept in constant motion between venues for performance, and sources of courtly patronage, stretching from Florence to Venice, from Mantua to Milan, from Vienna to Paris.

Marital collaboration furnished what stability and security the Andreini family enjoyed. Much like Bartholomew Kello, Francesco Andreini took it as his responsibility to support his wife’s literary career and ensure her posterity; but in so doing he also gave his own writings, published only after her death and sometimes intermixed with hers, a sterling pedigree. In the seventeenth century, cultural arbiters still accused actors of being ‘riff-raff.’ Humanistic and literary work brought cachet and legitimacy. Even if husbands did not commonly serve as their wives’ literary executors, then, we should not be entirely surprised to find — even as late as 1617, over a decade after Isabella’s death — that Francesco was still busy republishing her collected poetry (titled Rime) and bringing out posthumous editions of her incomplete writings. He emphasized the benefit of intellectual association with her in his own works as well, which he began to print after her death. Isabella Andreini’s literary cachet followed her husband and children as they pursued their own theatrical and intellectual itineraries.

Andreini and Inglis crossed not only geopolitical borders but also boundaries of genre and discipline. Andreini, a true chameleon, presented herself variously as a mother, citizen, student, and virtuosa — and occasionally she obliterated gender categories by appropriating explicitly male personae in performance and in print (see especially Ray). Inglis’s manuscript copybooks may seem demure by comparison. These works catalogue religious and botanical knowledge. Her texts drew heavily from the maxims of the humanistic moralist Guy du Faur de Pibrac (1529-1584), as well as the more decidedly reformist theologian Antoine de la Roche Candieu (1534-1591). Her floral imagery grew from the complex early-modern language of flowers (Tjan-Bakker). Yet Inglis was no mere copyist. Snippets of Greek and Latin join English and French texts, and her ornate painted miniatures enriched the passages:

Frequently, Inglis also ornamented the covers of her copybooks with elaborate embroidery:

Given this linguistic and artistic bravura, Inglis’s copybooks should be considered as original, in their own way, as any independent work of fiction.

In terms of their patronage, both women found international networks. Andreini’s admirers and patrons spanned the learned professions, clergy, and nobility in Italy, the Holy Roman Empire, and France. For her part, Inglis dedicated some of her most elaborate works to reformist nobility and royalty in locales as far from her home-base of Edinburgh as London, Cophenhagen, and Nassau.

Andreini and Inglis confronted hostile terrain even as they capitalized on the opportunities before them. Early modern conceptions of women frequently drew upon tropes of female mutability and untrustworthiness that had both classical and Christian resonances. Virgil summarized ancient Roman chauvenism in the phrase varium et mutabile semper femina (“fickle and ever-changing is woman,” Aeneid IV, 569—570). And the biblical story of Eve emphasized women’s susceptibilty to temptation and deceitfulness. Early modern conceptions of the ideal domestic built upon such stereotypes, making it women’s peculiar virtue to tend the private hearth faithfully, thus triumphing over their mutable natures by embodying reliablity and fixity. Women on the move, and especially women who dared to court fame, risked censure as ‘public’ women, that is, prostitutes. Theatrical performers frequently received that label, though Andreini dodged it.

And that leads us to the issue of strategies. On the one hand, Andreini and Inglis risked opprobrium by putting their works, names, and even faces in public view. Indeed, Andreini’s publications contained a frontispiece portraits, of which this is one example of several extant: 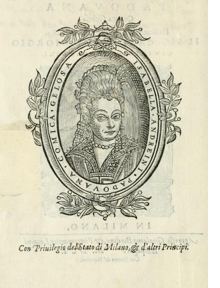 Frontispiece portrait of Isabella Andreini from her Rime (1601)

For her part, Inglis often included small self-portraits in her copybooks, too: 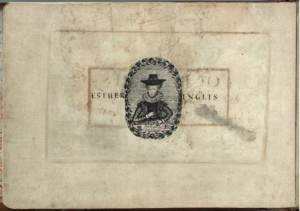 Esther Inglis’s self-portrait in a 1601 copybook of the “Octonaries upon the Vanitie and Inconstancie of the World” by Antoine de la Roche Candieu, Folger Shakespeare Library (Luna Digital Image Collection) V.a.91., fol.1v.

Support from their intellectual families helped to legitimize bold endeavors relatively unusual for women of their time. But Andreini and Inglis also skillfully spoke the languages of erudition, domesticity, and piety. When writing to humanist colleagues, for instance, Andreini included opportune references to her husband (see Ross, Birth of Feminism). In a similar way, prefatory comments in praise of his wife by Bartholomew Kello helped package his wife’s works (see Ross, “Esther Inglis”), as did her deft navigation of contemporary humility tropes (Zeigler, “More Than Feminine Boldness”). But even more crucial was Inglis’s decision to keep within the pious confines of Christian humanist texts, and to use the medium of manuscript. In the early modern British context, print seemed unseemly to some critics because readership could not be controlled; manuscript circulation within a close network of friends afforded a greater sense of propriety (see Love).

Such decisions furnished these creative women what we might call cultural passports, certifications of their legitimacy and credibility, that helped guide them across various checkpoints in the gendered social landscapes they traversed. Considering Andreini and Inglis together reminds us that women writers and artists from remarkably different backgrounds and geopolitcal contexts devised such passports for themselves, and modeled the process for others.

Jones, Ann Rosalind and Peter Stallybrass. “The Needle and the Pen: Needlework and the Appropriation of Printed Texts.” In Renaissance Clothing and the Materials of Memory. Cambridge: Cambridge University Press, 2000.

Ray, Meredith. Writing Gender in Women’s Letter Collections of the Italian Renaissance (Toronto: University of Toronto Press, 2009), especially Chapter 5, “Between Stage and the Page: The Letters of Isabella Andreini,” 156-183.

Sarah Gwyneth Ross is Professor and Chair of History at Boston College. Her publications include The Birth of Feminism: Woman as Intellect in Renaissance Italy and England (Harvard, 2009) and Everyday Renaissances: The Quest for Cultural Legitimacy in Venice (Harvard, 2016), and numerous articles on topics relating to the intellectual lives of people we might not expect to have had intellectual lives in early modern Europe. Ross is currently working on a comprehensive study of the Andreini family and their milieu, and a few pieces of that new research have recently appeared: “Apollo in the Counter-Reformation: Giovan Battista Andreini, Literary Authority and the Commedia dell’Arte,” in Mark Jurdjevic and Rolf Strom-Olsen, eds., Rituals of Politics and Culture in Early Modern Europe: Essays in Honor of Edward Muir, Centre for Reformation and Renaissance Studies (Toronto: University of Toronto Press, 2016), 283–308; and “Performing Humanism: The Andreini Family and the Republic of Letters in Counter-Reformation Italy,” in Ann Blair and Anja Goeing, eds., For the Sake of Learning:Essays in Honor of Anthony Grafton, 2 vols. (Leiden: Brill, 2016), 140–156.

4 Responses to May 2017 – Creative Women on the Move: Two Transnational Celebrities, An Actor and a Calligrapher