As I write this post, the first anniversary of the Women’s March has just passed. Hearing the theme of this year’s SSEMW blog, early modern intersectionalities and activism, I thought of the waves of activist energy that moved across the United States this past year, an activism that, in its best incarnation, strives to be intersectional. I wondered what early modern texts could teach today’s young activists about intersectionality, and how the work I’ve done on the political alliances of female characters on the early modern stage might provide insight for contemporary activism.

In the fall of 2016, I had just finished revisions on the volume I co-edited with Christina Luckyj, The Politics of Female Alliance in Early Modern England, when I learned I would have the chance to teach an early modern women writers course. I imagined hosting a panel of colleagues who teach women writers in other eras for a lively conversation and thought about how to bring race and class into our discussions. I collaborated with my university library’s Makerspace about creative assignments, settling upon a commonplace book project. Students would collect quotations over the course of the semester, curating a book of passages that appealed to them. Inspired by Aemilia Lanyer’s verse addressing Queen Anne, they would write a prefatory letter to a woman in power, explaining why she should read their book. Accompanying reflective essays would explain first, why students chose these specific passages; second, why they chose this particular addressee; and third, what they learned about authorship from making their own book. I was excited, and in those heady October days, imagined students addressing their books to our first female President. 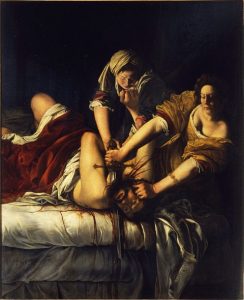 On Election Day, as it turned out, I learned that an administrative opportunity had opened up on campus, and I was asked to fill it. As a result, I ended up tabling my early modern women writers course. But I often return to this project in my mind, considering how it would teach in the wake of an election that went far differently than I had imagined. To whom would students dedicate their books? How would those books address a world of pussy hats, #MeToo, Muslim bans, and endangered DACA? What words would students find in early modern texts to help them shape advice, messages of hope or endurance, models of strength for a woman today?

This past October, a year after I was cooking up plans to teach early modern women writers, I received my copies of The Politics of Female Alliance in Early Modern England, fresh from the University of Nebraska’s press. For the cover, Christina and I chose Artemesia Gentileschi’s Judith Slaying Holofernes (her second version, painted in 1620-21). A painting we both love, we were moved to select it when Jonathan Jones wrote about it for the Guardian:

In most paintings […] Judith has a servant who waits to collect the severed head. But Gentileschi makes the servant a strong young woman who actively participates in the killing. This does two things. It adds a savage realism that even Caravaggio never thought of—it would take two women to kill this brute. But it also gives the scene a revolutionary implication. “What,” wonders Gentileschi, “if women got together? Could we fight back against a world ruled by men?”[1]

The question Jones imagines the painter asking speaks even more to me now than it did a year ago. Holding the book in my hands, I was again struck by the power of the image, recalling that in the painting, Holofernes bears the face of Agostino Tassi—the man who raped Gentileschi in 1612. The next week, the Edenbridge Bonfire Society in Kent would choose to burn Harvey Weinstein in effigy on Bonfire Night.[2]

A nineteenth-century illustration for Act V of Shakespeare’s Measure for Measure.

In mid-November, a passenger on a long car ride, I scrolled through #MeToo posts on social media and was led to a compelling piece Tara Isabella Burton wrote for Vox: “What a lesser-known Shakespeare play can tell us about Harvey Weinstein.” Burton reflects on Elevator Repair Service’s October 2017 production of Measure for Measure at the Public Theatre in New York. Offering a moving reading of the play, she argues that “temporal moral relativism”—the notion that feminists “invented” the concept of sexual harassment in the last thirty years or so—is proven false when one views Shakespeare’s problem play.[3] It is proven false, too, if one reads the transcripts of Agostino Tassi’s seven-month trial. And though one is the fictional creation of a male author, and the other the historical record of a female artist, both offer us the chance to hear the voices of early modern women—characters and humans—as activists and allies.

My chapter in The Politics of Female Alliance in Early Modern England takes up what I call women’s “virtual” alliances. I’ve found traces of these across dozens of texts from the period. Virtual alliances are apparent when women call upon an imagined community of (often explicitly virtuous) women, either requesting their aid or invoking their approval. It’s a familiar device from complaint poetry: Marina, the heartbroken shepherdess of William Browne’s Brittania’s Pastorals (1613), asks Echo to sympathize with her, spreading her sad tale by “teach[ing] it to another” until “round the world in sounding coombe and plaine, / The last of them tell it to the first againe” (Book 2, song 2), creating a never-ending, female-voiced network of grief.[4] But these appeals appear in drama, too: in Two Noble Kinsmen, the Jailer’s Daughter imagines that, should she die in the woods seeking Palamon, “some honest-hearted maids, will sing my dirge” (2.6.15).[5] Invocations of imagined community serve as markers of empathy: the woman in need imagines a community of other women who, by the very fact of their gender, would be compelled to lend support. And, at times, the inverse is applied: the speaker is moved to act because the larger, virtual community of women would expect a certain action from her. We see the latter in Two Noble Kinsmen, when Emilia pleads with Theseus to spare Palamon and Arcite’s lives:

Knowing that failure to try save the young nobles would be an offense to women everywhere, Emilia humbles herself before the Duke. Similarly, in the opening act, she joins her voice with the pleading Theban widows, saying, “What woman I may stead that is distressed / Does bind me to her” (1.1.36-37). Women in early modern texts invoke the censure or support of women in the wider world on a regular basis to justify their choices, offer comfort, or galvanize themselves to act.

Thinking of these appeals in action on the early modern stage adds additional layers of meaning. As Phyllis Rackin reminds us, “women were paying customers in early modern theatres.”[6] When a female character onstage in an early modern play calls to her aid an imagined community of women or acts based upon the perceived needs and values of other women in the world, one can imagine the women in attendance feeling activated, motivated, connected as they sit or stand in the audience. And what is that if not an intersectional experience? We know those audiences were packed with a rich cross-section of London society, from the lords in the galleries or stools onstage, to the groundlings milling about at a penny a piece. Imagine the unifying, harmonizing effect of a call for all women’s voices in such an arena.

Such appeals pose political resistance in a court troubled by the problems of male prerogative in Beaumont and Fletcher’s The Maid’s Tragedy (1610-11). Aspatia, abandoned by her lover Amintor, refuses to swallow her grief. Instead, she spreads it: men in the court discuss with awe her ability to convert a happy company of laughing ladies telling “mirthful tales” into a weeping gathering through her sad story about a “forsaken virgin,” an image of herself. Significantly, her sorrow, though “infectious,” is not depicted as a disease; rather, it is characterized by the eloquence with which she sings, sighs, “brings forth a story,” and affects all those around her (1.1.97–107).[7] Ultimately, it is through story telling that she enacts her greatest resistance: urging her gentlewomen to rewrite the story of Theseus in a tapestry they’re weaving and drown the philanderer, saying “’Twill make the story, wronged by wanton poets, / Live long and be believed” (2.2.58–59). Rewriting this particular, famous tale, Aspatia symbolically takes command of the narrative of all abandoned women, seeking justice. She reaches across the years to identify with Ariadne, simultaneously reaching out to the women in the audience, assuring them that such stories can be rewritten.

Jones’s and Burton’s essays suggest that people are looking to the early modern period for inspiration and models of activism. I believe women’s resistance in early modern drama can teach us about intersectionality through their rich concepts of audience and storytelling. While the examples that I am working with do not account for race—a vital element of any intersectional endeavor—they do take in class and gender. Recognizing that Aspatia, the Jailer’s Daughter, and Emilia would all have been played by men, in plays written by men, and considering the reality of the early modern theatre as a unifying social experience, we can understand how a female-character-voiced appeal from the stage reached across categories of gender and social status to craft a truly intersectional moment. (I am eager to hear from others about examples of appeals to the virtual community of women that engage racial difference as well.) This intersectional moment, often initiated via an appeal to a virtual community of women, generally focused on the outcome of women’s stories—who gets to tell a woman’s story is very much at issue in these texts. Aspatia and the Jailer’s Daughter want honest maids to sing at their funerals. Emilia worries what women will say of her if she doesn’t act to save the young men, and adds her voice to the Theban widows upon hearing their story. Aspatia claims wanton poets have “wronged” the story of Ariadne in letting Theseus escape. Early modern women connected through craft, as Amanda Herbert has demonstrated.[8] Their social connections relied upon the world of making—recipe-writing, beer-brewing, sewing, weaving, and more. And so it’s no surprise that in early modern texts, activist women reach across boundaries of class through their creative endeavors and deploy that connection to tell stories, claiming narrative authority. Telling one’s story is the ultimate act of resistance on the early modern stage, and when told to a diverse audience, it’s also an intersectional act.

Niamh J. O’Leary is Associate Professor of English and Director of First-Year Seminar at Xavier University in Cincinnati, OH. She is the co-editor, with Christina Luckyj, of the essay collection The Politics of Female Alliance in Early Modern England (University of Nebraska Press, 2017), and the Book and Performance Review editor for Early Modern Culture. Her articles on early modern theatre, performance, and film adaptations have appeared in Upstart Crow, Early Modern Studies Journal, Shakespeare Bulletin, and The Shakespearean International Yearbook. She is writing a book about Shakespeare in Cincinnati.

[3] Tara Isabella Burton, “What a lesser-known Shakespeare play can tell us about Harvey Weinstein,” Vox.com, November 15, 2017.

4 Responses to February 2018 – Activism and Intersectionality, Storytelling and Audience