Posted on December 15, 2020 by Katherine McKenna 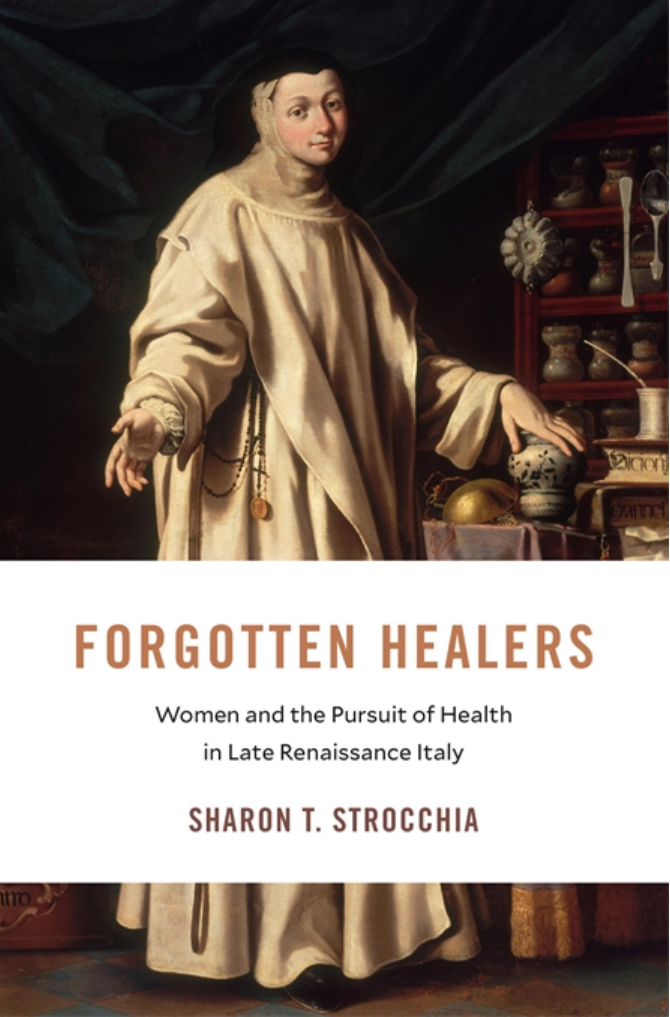 One of the most striking features to emerge from recent studies of Renaissance medicine is the sheer diversity of female practitioners who anchored a wider medical economy. Thanks to a growing body of scholarship, we know that women from northern Europe to the Mediterranean basin permeated every aspect of healthcare services between 1400 and 1700. The household remained the primary locus of care well into the eighteenth century, despite the proliferation of hospitals and other charitable institutions. Women from all walks of life formed a crucial part of medical provisioning outside the home as well, especially in urban societies. They served as paid and unpaid nurses, hospital administrators and community caregivers; made and marketed medicines as commercial pharmacists and estate managers; and managed the reproductive process as civic midwives and wet nurses in charitable institutions. Women who were celebrated as “expert practitioners” testified in court and assessed the health status of domestic slaves in contract disputes. Other practitioners who had learned their craft by means of hands-on training worked as oculists or carried out minor surgeries, while wives and widows ran health-related establishments alongside their husbands or apprentices. Gentlewomen wrote and occasionally published collections of medical recipes, while many more circulated healing knowledge through broad epistolary networks. Female relatives, friends, and neighbors offered the priceless gift of consolation in the form of healing words that facilitated recovery and helped the sick make sense of suffering. Pious women working singly or in groups provided important end-of-life services; they not only comforted the dying but bore witness to the very act of dying well. Women also repurposed their experiential knowledge of the body to meet the innovative demands associated with early modern poor relief. For instance, elderly parish women who first acted as “keepers” of the sick soon became “searchers” of the dead who advanced public health schemes by relaying epidemiological information to civic authorities. In short, Renaissance women performed much of the day-to-day work of healing and caregiving throughout this period.

These profound contributions to health and healing have long been hiding in plain sight because of fragmentary documentation, the silence of sources on everyday matters of importance, and contemporary work-sharing arrangements that make it difficult for historians to know who was doing exactly what work. But there are also larger conceptual issues that have shaped our understanding of medical care in the early modern period. The historiography of Italian Renaissance medicine in particular has been dominated by developments in academic medicine—anatomy, dissection, humanistic debates—rather than the lived experience of illness or the activities of frontline healers in households and hospitals. In addition, many of the care practices performed by Renaissance women have either been naturalized as “women’s work” or coded as charitable activities. The first interpretation makes women’s labor and know-how less visible, while the second often empties it of medical meaning. Furthermore, a persistent focus on practitioners’ occupational identities, along with the greater value assigned to cure over care, have led scholars to both undercount and undervalue the healthcare services women provided. In order to assess early modern medical provisioning more accurately, we need to redefine what “counts” as medical work.

My book responds to this call by examining the broad palette of women’s medical knowledge and activities in late Renaissance Italy (1500–1630), a period best known for its striking transformations in academic medicine. Mining a wide range of archival records, my study demonstrates both the sweeping scope and the social importance of women’s contributions to medical provisioning. At the center of analysis is a rich matrix of practitioners—household caregivers, nun apothecaries, noble-born empirics, poor hospital nurses—whose health-related activities positioned them as important knowledge-makers and commercial innovators within a changing medical landscape. As agents of health, Italian urban women operated along a differentiated continuum of skill and knowledge that was produced and transmitted experientially. I argue that increased demand for healthcare services, coupled with the growing interest in preventive health practices, opened new opportunities for Italian women to participate in both the medical economy and emerging cultures of experimentation. In so doing, I take an integrative approach that moves beyond a single methodology or type of document in order to connect the study of health and medicine to broader developments in politics, society, economy, and religion.

One of my key arguments links experiential know-how to other forms of knowledge production about the body and the natural world. The pursuit of health often furnished the springboard for women with skilled hands and inquiring minds to experiment with remedies or put body knowledge to new uses. By and large, their goals were results-oriented. Pharmacy in particular offered an arena for elite women to advance experimental interests and circulate proprietary remedies within broader epistolary networks. Medical reading offered another avenue for practical knowledge-making. Literate women not only consumed but also produced new knowledge by extracting and reorganizing information found in printed herbals and regimens, and then interpolating new observations. Poorer widows and single women more often had explicit commercial objectives when making and marketing remedies within an economy of makeshift. Similarly, the countless women living in Italian custodial institutions—orphaned girls, abandoned wives, converted prostitutes—circulated embodied knowledge about healing by tending the health needs of other residents.

By placing Italian women healers squarely at the center of analysis, my study both recuperates their importance to local health markets and highlights significant differences in medical provisioning across Europe. Late Renaissance Italy stood out from its northern neighbors due to its high urban density, commercialized economy, extensive print culture, precocious medical humanism, and well-developed court societies. Yet despite its cultural splendor, the late Italian Renaissance was marked by hard times and social unraveling. The spread of syphilis, recurrent famines, and widespread unemployment led to growing impoverishment after 1550. The devastating plague of 1575–1578 ushered in new civic initiatives to track the spread of disease, quarantine suspected goods, segregate the sick, and otherwise contain contagion. Catholic reform turned the spotlight on social welfare; papal Jubilees brought flocks of pilgrims into Rome; religious persecution forced migrations into and out of the peninsula. All of these circumstances increased the demand for healthcare services across Italy—a need met in significant part by cheap or unpaid female labor. Finally, thanks to a torrent of vernacular print, sixteenth-century Italians claimed a high degree of health literacy that stressed the importance of the six “non-naturals”—diet, air, sleep, evacuation, exercise, emotional equilibrium—in maintaining good health. Since domestic spaces featured prominently in this burgeoning culture of prevention, Italian female householders were transformed into guardians of healthy living.

In viewing women and the pursuit of health in late Renaissance Italy, my study breaks new ground in three main ways. First, I take a more body-centered approach to healthcare that focuses attention on what Renaissance Italians actually did to treat and prevent illness. This approach both highlights the social range of women involved in healthcare and illuminates the value and meanings contemporaries attached to their services. My book cuts across a broad swathe of activities and social strata to present a sweeping panorama of women healers. In this study, we meet princely consorts concerned with keeping their heirs healthy; court ladies who circulated medical practices across political and linguistic boundaries; patrician women and merchant wives who trafficked in the healing power of relics; unwilling nuns who found intellectual outlets in medicine and the natural world, and their more devout sisters who excelled at making and marketing remedies; peasant women entrusted with nursing the Medici children; widows and single women who staffed hospital pharmacies; orphaned girls who tended poor syphilis patients in hospital. Moving between the micro and the macro level, my study zeroes in on the lives of individual practitioners to analyze the broader systems of their day.

Second, I argue that Italian women working outside traditional guild and academic settings became invested in empirical knowledge-making through the pursuit of health. My study thus extends the reach of empirical culture into the female spaces of Renaissance courts, convents, and charitable institutions. One of the threads guiding my investigation is the notion that vernacular knowledge production involved different “ways of knowing.” Recent scholars have asked how empirical knowledge was generated in the early modern world, how these processes worked, and who participated in them. This body of scholarship decenters book learning and foregrounds the importance of apprenticeship, embodied skills, and the role of the senses in empirical inquiry. The result is a more collaborative, skills-based view of early modern knowledge production that unified the work of mind and hand and created important synergies among the arts, crafts, and sciences. Taking cues from this “material turn,” my study examines how various forms of bodywork provided avenues for Italian women to participate in the culture of experimentation.

Finally, my study offers a pioneering look at the commercial dimensions of women’s pharmacy work in late Renaissance Italy. Among the most prominent medical vendors of their day were enclosed nuns, whose numbers in Italy were proportionally the highest of any place in Europe at this time. Heirs to a long healing tradition, Renaissance nuns commercialized their pharmacy work after 1500, in part by capitalizing on the globalizing trade in medicinals. These women understood their work to be both sacred and scientific. Producing and marketing drugs to the public generated important revenues for many communities; at the same time, nuns’ pharmacy work both augmented the medical resources available in Italian urban society and gave religious women public standing and significance beyond the spiritual realm. Probing still further, my examination of convent workshops highlights women’s engagement with the materiality of making medicines—its fierce heat, pungent smells, and distinctive tools. As they worked at the nexus of market and laboratory, nuns became both medical artisans and entrepreneurs who contributed to product innovation and new market trends.  To remain nimble in a competitive marketplace, they utilized their wide-ranging information networks comprised of friends, relatives, neighbors, spiritual supporters, and business partners to stay abreast of new technologies and changing consumer preferences. Mapping these networks showcases the complex social circuits through which information flowed in early modern cities.

The stories of these forgotten healers open important new insights into the relationship between health and society in the early modern period. Rich in human detail, they also enable us to denaturalize forms of medical labor, expand the reach of empirical culture, and illuminate the collective nature of medical knowledge-making in late Renaissance Italy. 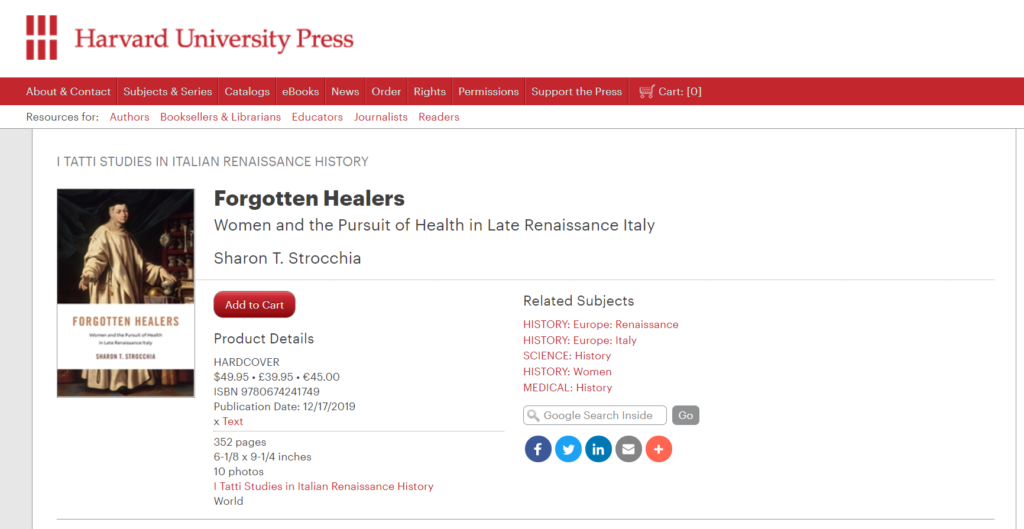 Sharon Strocchia is Professor of History at Emory University. A social and cultural historian of Renaissance Italy, she has published widely on women, religion, and health-related topics. Her books include Death and Ritual in Renaissance Florence (1992); Nuns and Nunneries in Renaissance Florence (2009), which won the Marraro Prize from the American Catholic Historical Society for the best book in Italian History; and Forgotten Healers: Women and the Pursuit of Health in Late Renaissance Italy (2019), which was awarded the Marraro Prize by the Society for Italian Historical Studies. Strocchia also edited a special issue of Renaissance Studies on women and healthcare in early modern Europe (2014) and co-edited (with Sara Ritchey) Gender, Health, and Healing, 1250-1550 (2020), which was named co-winner of the 2020 Collaborative Project Award by the Society for the Study of Early Modern Women and Gender.