Posted on January 26, 2021 by Katherine McKenna

Although many monastic communities of women had previously separated themselves from the earthly and mundane realms as an aid to spiritual devotion, Pope Boniface VIII famously and definitively declared in his 1298 decretal, Periculoso, that all nuns were to be perpetually cloistered. In keeping with this regulation, the walls of early modern convents came to suggest the existence of absolute conditions, but these seldom existed in reality. While the built enclosure communicated the convent’s supposed isolation from the secular world, connections between nuns and individuals or groups outside their communities extended into and from these houses, with each constituency exploiting these associations to serve its own aims. Likewise, the walls conveyed the presence of a homogeneous and unified community where, in reality, residents’ differences in status, power, and other interests often led to the development of internal alliances and factions. 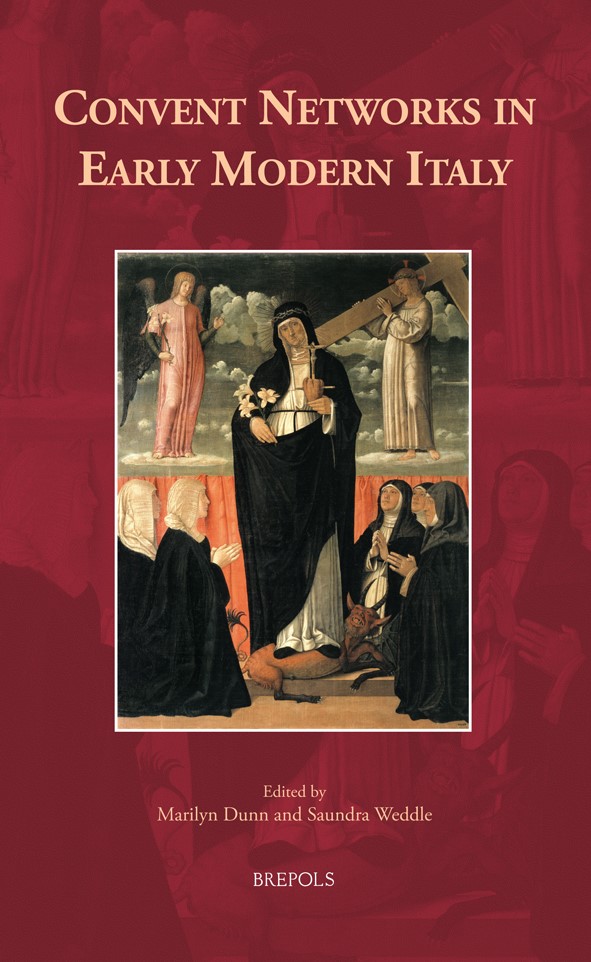 This book builds on the recent upsurge of scholarly interest in convent networks, a topic that previously has not been focused in a single volume. Its interdisciplinary essays examine how and why such associations existed. The collection explores the personal, spatial, and temporal networks that emerged in, among, and beyond convents in Italy during the early modern period (fifteenth through early eighteenth centuries). As this volume demonstrates, these ties were established, cultivated, or even rejected in a variety of ways and for diverse purposes, not only by women in religious communities, but also by lay persons. Authors explore how these connections influenced nuns’ devotional lives, their relationships with patrons, and their cultural engagement and production, revealing how particular contexts inflected these complex associations.

Themes that are central to social network analysis offer a theoretical and conceptual framework for the book’s case studies of convent communities and individual nuns. Authors consider nuns and convent communities as nodes within unique collections of interpersonal and group associations, with ties of varied strength and status dynamics that operated vertically and horizontally. Early modern nuns and convents were acutely aware of the social capital inherent in the networks in which they participated, and they deftly navigated the dynamics of these complex relationships to advance their agendas. Chapters consider how texts, art, architecture, music, gift and favor exchange, real estate development, and other modes of expression were deployed in a myriad of ways, for varied ends, by nuns and their lay contacts outside the enclosure.  In investigating the character and function of multiple kinds of networks, the authors draw upon an extensive use of archival materials, such as letters, convent chronicles, nun-biographies, financial and property records, and other documents, as well as look to the visual record of material culture. They address diverse network relationships and elucidate interwoven types, mechanisms, and patterns of networks that are related across time and space.

The volume covers the period before and after the Council of Trent (1545-1563), which imposed a transformational reform program that restricted convent enclosures. This time span informs an analysis of convents’ responses to changing power dynamics, both inside and outside the enclosure. The book also engages a broad geographical and cultural range, with chapters focusing on the centres of Florence, Venice, and Rome; the courts of Urbino, Ferrara, and Mantua; and other cities across the Italian peninsula, including Brescia, Soncino, Borgo San Lorenzo, Paradiso, Prato, Pistoia, Bologna, Siena, Milan, Marino, and Avezzano. This scope contributes unprecedented insights into early modern Italian convent life and its varied forms and modes of expression, revealing how local circumstances either did or did not affect convent practices.

Chapters by Jennifer Cavalli and Meghan Callahan explore networks established and promoted through shared spiritual values, examining the role of letters in documenting and maintaining relationships between female spiritual advisors and their female advisees. Based on the correspondence of Augustinian nuns, Francesca Caprioli and Laura Mignani, from S. Croce in Brescia, and Dominican tertiary Stefana Quinzani from Soncino, Cavalli’s chapter investigates spiritual advising relationships between holy women nuns and noblewomen in northern Italian courts in a time of political turmoil, namely during the Italian Wars (1494-1559) of the early sixteenth century. Callahan analyzes networks forged by Suor Domenica da Paradiso, who founded the convent of La Crocetta in Florence (1511) in order to continue Girolamo Savonarola’s reform movement; through her letters to women in Florence and beyond, in Tuscany, Emilia Romagna, and Le Marche, Suor Domenica created an epistolary network of nuns, convents, religious women, and laywomen of various social classes.

Essays by Catherine Turrill Lupi and Laura Llewellyn focus on networks bound by shared religious affiliations in which works of art linked individuals and communities. Turrill Lupi continues the exploration of Savonarolan networks addressed by Callahan’s essay in a chapter that examines the networks of two generations of women patrons, as well as painters and piagnoni (‘big weepers’, a pejorative nickname for Savonarola’s followers) at the Dominican convent of S. Caterina in Cafaggio in Florence. Works sponsored by these women fostered the cult of Savonarola in the public church and enclosed convent spaces, where he was acknowledged as a prophet, saint, and martyr well into the sixteenth century, long after his dramatic and violent death and subsequent, sustained repudiation in dominant political circles. Llewellyn addresses a broad network of Augustinian interests in Florence’s Oltrarno neighborhood, with Francesco Botticini’s St Monica Altarpiece (c. 1485) in the church of S. Spirito as its visual nexus. Based on new sources and a reinterpretation of previously identified documents, Llewellyn untangles the complicated and confusing archival record related to this painting of St Monica enthroned with women of the Augustinian order, proposing that the chapel and its altarpiece served the devotional needs of the various branches of the Augustinians.

Chapters by Saundra Weddle and Ludovica Galeazzo focus on convent networks in Venice. Both authors place emphasis on architecture and the built environment to explore various conceptions of networks that existed within convents and extended convents’ reach into the social and urban fabric of the city. Saundra Weddle examines the 1519 reform of Venetian convents, which thrust convents into a lengthy period of transition from Conventual (less strict) to Observant (more disciplined) communities, a process during which convent identities and alliances were thrown into a state of flux. Weddle notes how this uncertainty contributed to the development of new patronage networks both within convents, amongst Observant nuns, and also outside the cloister with their lay benefactors, as the Observant character of convents emerged. Galeazzo focuses on the convent of S. Caterina dei Sacchi, whose elite nuns possessed an administrative and managerial acumen that empowered the convent to actively engage in the physical, social, cultural, and urban development of the northern rim of Venice despite clausura (enclosure) regulations. Her chapter elucidates the convent’s adoption of a strategically calculated financial policy that enabled it to gain control of surrounding property, embark on projects of land reclamation, urban development, and real estate investment in the area around the convent and on the Venetian terraferma (mainland empire), and undertake a campaign of architectural and artistic patronage to embellish the convent and its church.

Building on scholarship from recent decades that has brought to light the significance of nuns’ music in the early modern period, Kimberlyn Montford’s chapter surveys the musical networks of early modern Italian convents within the context of post-Tridentine reforms. Montford examines the diverse and uneven application of reform in various Italian cities. She identifies different kinds of music-centered networks that nuns adroitly utilized to maintain their presence in the musical and urban landscape by engaging the Church hierarchy that oversaw their convents and cultivating associations with laywomen and the elite social and political structures of their cities.

Noting that one of the aims of the Tridentine reforms imposed on convents was to curtail family influence and interference in convent life, Marilyn Dunn argues that, nonetheless, many convents in seventeenth-century Rome continued to be favored sites for patrician families to place their daughters, creating clusters of related nuns who often represented multi-generational family lineages or dynasties within their convents. Focusing on the elite convent of SS. Domenico e Sisto, Dunn examines the networks cultivated between the convent and families and the resultant empowerment of nuns as active agents. She further explores the dynamics of networks of alliance formed between male and female siblings of the Colonna family, a broader network of Dominican convents, and female supporters of Catholic reform that proved crucial in the early history of two little-studied observant and austere Dominican convents founded outside of Rome by Colonna nuns from SS. Domenico e Sisto.

Networks of family alliances, and aristocratic nuns’ continued role in the construction of family identity from within post-Tridentine convents, noted by Dunn, are also evident in Sheila Barker and Julie James’ examination of the art production of aristocratic artist-nun Suor Teresa Berenice Vitelli at S. Apollonia in Florence. Their chapter carries the volume’s investigation of convent networks into the early eighteenth century and, like those of Turrill Lupi and Llewellyn, positions art as the link that connected a complex network. They consider Suor Teresa Berenice’s strategies of linking herself to family identity through her artistic imagery and directing her artworks as gifts to family and the Medici court, and for display at a public exhibition organized by the Accademia delle Arti del Disegno. In this way, Suor Teresa Berenice forged connections, founded in mutual cultural interests, to a broader network of intellectual and politically elite patrons and the artistic community outside her convent.

This collection of essays demonstrates that while nuns and their convents cultivated and depended upon their network alliances, individuals outside the enclosure not only acknowledged but also sought out these relationships, thereby challenging the characterization of enclosed women existing on the margins of society and culture in early modern Italy. As such, it will be of interest to scholars and students of early modern history; art, architecture, and music history; religious history and female convents; women’s studies; and social networks. 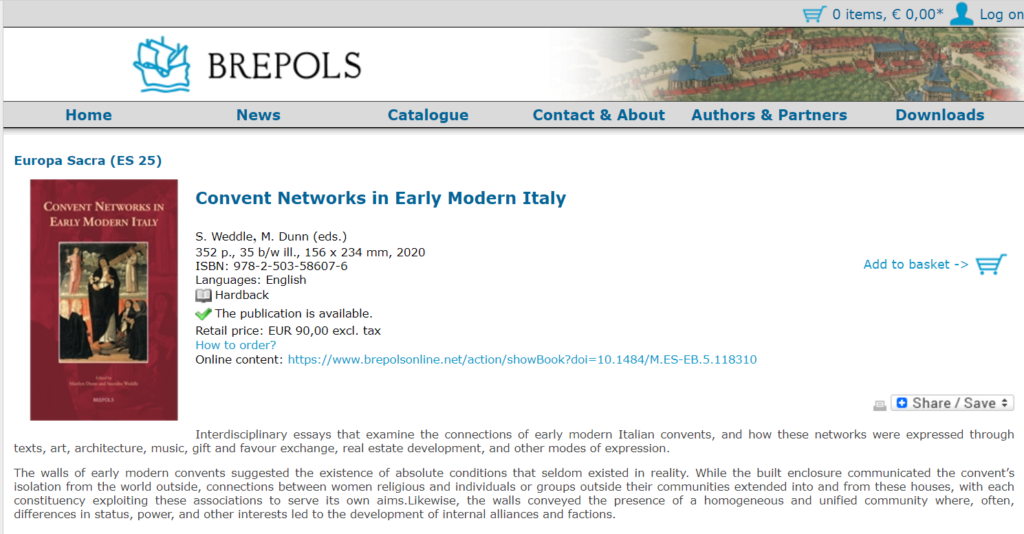 Marilyn Dunn is an Associate Professor of Art History at Loyola University Chicago. Her publications on religious communities in seventeenth-century Rome have emphasized the role of women and nuns as patrons of art and architecture.

Saundra Weddle is a Professor at the Hammons School of Architecture at Drury University. Her publications address the form and function of convent architecture in Renaissance Italy, and include a translation of the chronicle of the Florentine convent, Le Murate.

This series is concerned with the relationship between religion, society, culture, and identity in Europe from the early medieval period to the end of the ancien regime, with particular emphasis on continuity and transformation within urban religious life and institutions. The series concentrates on medieval Europe, though may also include North Africa and the Middle East, with a particular emphasis on studies that focus on history in the longue durée.

This entry was posted in Articles and tagged gender, Italy, nuns, social networks. Bookmark the permalink.